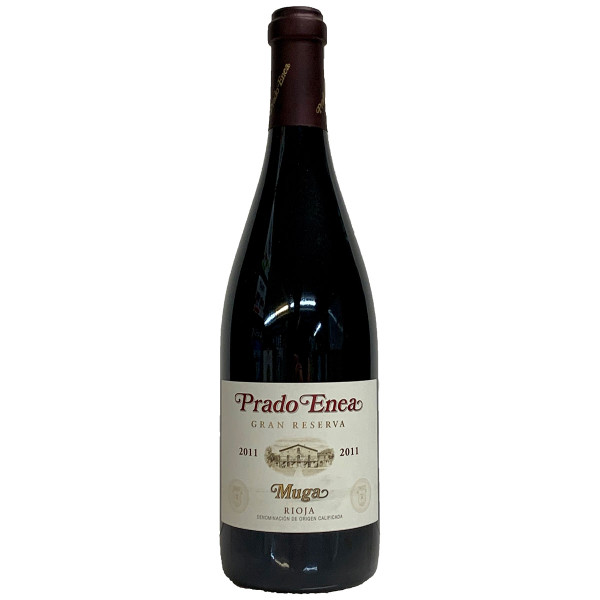 The 2011 Muga Prado Enea Gran Reserva is selected from plots located in the area of Villalba de Rioja, on the south-facing slope of the Montes Obarenes, a recognized high-quality terroir. After an extensive aging process that far exceeds the requirements for Gran Reserva, this amazing wine exhibits an attractive, deep cherry color and a nose that is fresh and complex, expressing aromas of blackberry forest fruit and prunes, while notes of cocoa, vanilla, and subtle toast also come through denoting aging in top-quality oak. It's fresh on the palate with very well-integrated acidity, a lovely, pleasant mouthfeel, and a long finish. This wine pairs well with casseroles, meat dishes, fish, and cheese.

96 Points - Wine Advocate
"The most classical of the wines from Muga, the 2011 Prado Enea Gran Reserva comes from a warm year that here was cooler than 2012, when they did not produce it. There won't be a 2013 either. So after this 2011, the following vintage will be 2014 but with fewer bottles and then 2015 and 2016. The wine has a developed nose with some tertiary notes, combined with some notes of ripe black fruit and sweet spices. It fees like an open, expressive and hedonistic year for Prado Enea. The palate reveals polished tannins and some balsamic and developed flavors, truffle, forest floor and hints of cigar ash and incense. Stylistically, this could be close to the 2006, which was also surprisingly fresh for the average ripeness found in Rioja in general. 92,000 bottles produced. It was bottled in early 2015 after almost 40 months in barrel. Time in bottle has polished the wine, and it's ready to drink on release, but it's a wine that is going to develop in bottle for a long time." -LG, 6/28/19