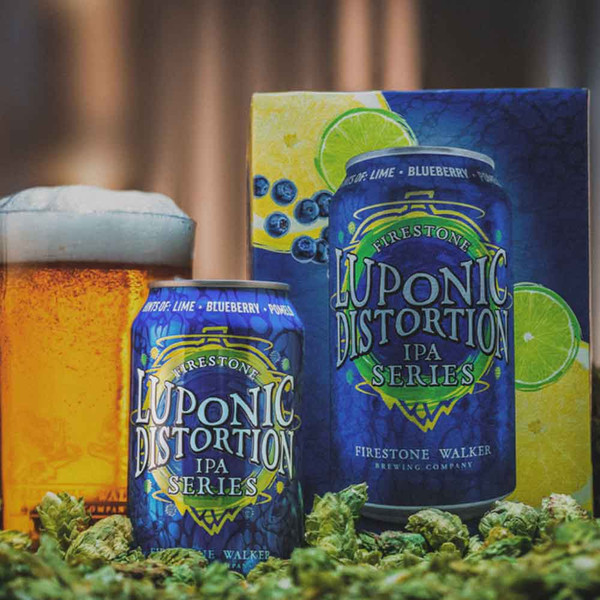 From an emerging Willamette Valley cultivar to a brewery-sponsored hop from the Yakima Valley, Firestone Walker’s Luponic Distortion IPA series is back with another mind-bending hop blend—this time delivering flavors of lime, blueberry and pomelo.

Advancing the mantra of “flavors through hops,” the latest release of Luponic Distortion is now rolling out in six-pack and draft formats to all Firestone Walker markets.

“This edition features an eclectic mix of new age hops and old-school favorites from the Pacific Northwest, made to push the beer into new boundaries of flavor,” said Brewmaster Matt Brynildson.

Luponic Distortion is not a single beer, but rather an ongoing series of beers. While the base beer always remains the same, each release features a different hop blend built around new and experimental hops, designed to showcase the growing possibilities of pure hop aromas and flavors without any assist from fruit or other adjuncts.

Pure Alchemy
One centerpiece of the latest Luponic Distortion is a hop that Firestone Walker first co-sponsored four years ago in an experimental plot cultivated by grower Jason Perrault in the Yakima Valley. “We helped push this hop forward, and we got the first crack at brewing with it,” Brynildson said. “It’s super pungent, and I liken the flavor to the pomelo fruit, which is also known as ‘citrus maxima.’”

Another focal point of the latest blend is an emerging hop from the Willamette Valley with a distinct berry character.  The remainder of the blend is composed of three classic American “C-hops” to round out the beer’s citrus notes, which include suggestions of lime peel and grapefruit.

“We found that when we blended these hops together, there’s a certain alchemy—a luscious blueberry aroma that is reminiscent of a blueberry-basil cocktail,” Brynildson said.

He added, “We work closely with breeders and growers so that we can be a part of bringing new hop flavors to the beer drinker. Luponic Distortion is the perfect canvas for this effort, which is really evident in this latest edition.

Enter If You Are 21 Or Older